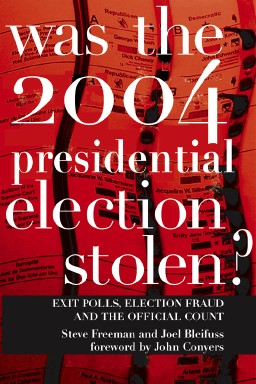 "Freeman and Bleifuss document the final proof of the most monumental theft in American history."

The idea that a presidential election can be stolen was the stuff of airport fiction until someone did it.... Was the 2004 Presidential Election Stolen? by Seven F. Freeman and Joel Bleifuss, answers its own question with a resounding 'yes.

Guided in no small part by Steve Freeman’s original analysis of exit polls nationwide, I began my own investigation of the official results… What we found indicated problems in nearly every sphere of the electoral process ..

Unfortunately, the lesson of our past two presidential elections has become patently clear- poor decisions by election officials, whether motivated by political bias or stunning negligence, can result in the disenfranchisement of voters and the massive distortion of election results….Freeman and Bleifuss shape the raw data into an image of all that the Founders warned us against.”

- Congressman John Conyers, Jr. (from the foreword), Ranking member and Chair of the US House Judiciary Committee

After Steven Freeman first pointed to the statistical improbability of the discrepancy between 2004 Election Day exit polls, which forecast a Kerry victory, and the officially reported results, opinion leaders accepted with relief the mea culpa offered months later by exit pollsters Joe Lenski and Warren Mitofsky. The careful analyses presented in this book demonstrate that the pollsters’ explanation is utterly unsatisfactory. Indeed, the additional evidence that Freeman and Bleifuss develop is even more disquieting than the original discrepancy. Their book deserves to stimulate follow-up investigations into the threat to our democracy posed by insecure electronic voting machines, and into the possibility that their vulnerability was exploited in 2004 with fateful results.

Freeman and Bleifuss have made a critically important contribution to the debate over election accuracy and integrity in the United States.  Their book offers the most thorough account to date of the large and growing body of evidence indicating that the 2004 presidential election was stolen.  They cover the evidence of voter suppression, bias in election policy and administration, disparities between exit polls and election returns, and much more.   While making these and other complex subjects accessible to non-experts, Freeman and Bleifuss also discuss larger questions about the role of elections, election administration, and media oversight in modern representative government.  They demonstrate that American democracy itself is in jeopardy.

Our country cannot survive as a viable democracy if our election processes are corrupted. Freeman and Bleifuss responsibly and insightfully investigate evidence suggesting that the 2004 presidential election may have been stolen, using as a focal research question: either the exit polls were unusually way off or the votes were not accurately counted. Concerned Americans should not ignore this intelligent book.

Was the 2004 Presidential Election Stolen? discusses a contentious, but not a partisan issue. People differ strongly about whom they want in the White House, but almost everybody wants whoever is there to be seen as having been rightfully elected. Steve Freeman and Joel Bleifuss explore at length several possible explanations for the discrepancy between the exit polls and the final counts during the 2004 election. Only those who simply and reflexively assert the explanation with which they're most comfortable will dismiss this careful and judicious book as the work of conspiracy theorists.

- John Allen Paulos, Professor of mathematics, Temple University, winner of the 2003 American Association for the Advancement of Science award for the promotion of public understanding of science

In the aftermath of the 2004 election, I was convinced that the exit polls had got it wrong, that George Bush had won the popular and electoral vote, and that arguments to the contrary were little more than a combination of sour grapes and conspiracy theory. After reading this book, I’m no longer so sure. When asked ‘was the 2004 election stolen?’ the only honest answer I can now give is ‘I don’t know.’ That is a sad commentary on the state of elections, election polling, the news media and academic research in the United States and it needs to be remedied.

Freeman and Bleifuss make you smell the fraud, taste the fraud and understand the fraud -- in straightforward language that ends all dispute.

This is the book I have been waiting for. Freeman and Bleifuss are reasonable, balanced, and insistent--addressing the questions about the 2004 elections that won't go away. They specifically target the exit polls and explore how these exit polls (the gold standard of polling) could have been so far off from the official count in so many states. Readers will have the opportunity to step outside a comfortable conventional wisdom, not into a world of conspiracies but into the territory of careful searching, combining the best features of science and true investigative journalism.

This book is a must-read for anyone wanting to understand what has happened in the last several presidential elections. Don’t pooh-pooh Freeman’s premise without giving it a closer look. Come back with reasoned arguments if you can, but this book needs to be part of a crucial public debate about our elections and our future….

If this were a lightweight book skimpy on detail, you might write it off as wishful thinking. But, the case is carefully built, brick by brick. There is nothing wild nor outlandish about either the writing style or the claims. It’s hard to read all of this material without coming to the same conclusion.

I think they call them "exit polls" because people bolt for the exits when you mention them, but I'm still fascinated by the subject myself, and this book is one of the reasons why. In Was the 2004 Presidential Election Stolen?, the central focus is, of course, on the infamous exit-poll discrepancies of the 2004 US Presidential election; but the authors also put it into context: they discuss the 2000 election, the irregularities in Ohio in 2004, the electronic voting machines issues, and the media's strange reluctance to report on any of these problems. Further, in the chapter "How did America really vote?", they compare the indications of the raw exit-poll data to other available polling data. Throughout, Freeman and Bleifuss do an excellent job of presenting arguments based on statistical analysis in a clear, concise way.

If you seek a very accessible guide to the 2004 election, starting with election night and proceeding through all the major issues, I can't make a higher recommendation than this book…

With meticulous care and full documentation, [Freeman and Bleifuss] demonstrate that the "within precinct disparity (WPD)"- i.e., the difference between the exit poll results and reported vote tallies in the sample precincts used by the pollsters- cannot be adequately understood by any of the explanations presented to date. The authors also review the problems encountered in the 2000 election, especially in Florida, with its butterfly ballots, hanging chads, and purged voter rolls, and consider contemporary methods of voter fraud, especially the problems with direct recording electronic (DRE) voting machines. In the book's heart, the authors explain exit polls and the high rate of confidence they enjoy, so much that they are routinely used to verify the accuracy of elections in developing democracies. Kerry won the national popular vote by five percent by their estimation. They conclude with an indictment of the press for failing to question the suspicious explanations offered by the winners and, surprisingly, by Democratic leaders. Although Republican partisans and their sympathizers will undoubtedly challenge this book, it should be purchased by all public and private libraries as an important contribution to the literature on the 2004 election.

Twenty months after the 2004 presidential election, Was the 2004 Presidential Election Stolen? is the first sustained investigation of what really happened on the first Tuesday of November 2004. Scrutinizing the widest spectrum of facts and theories that have emerged to explain the discrepancy between the exit poll results and the official count, authors Steve Freeman and Joel Bleifuss tell the story of our electoral democracy at this moment in its history without fear or favor. The story they have to tell is a damning one- one that has profound implications for the 2006 and 2008 elections, indeed for the future of American democracy:

• Was there something wrong with the way that exit polls are conducted in the United States or does the problem lie with a lack of security at the ballot box? In their book, Freeman and Bleifuss plumb both the history of exit polling and the state of the art today. The Election Day 2004 exit polls showed Kerry winning nearly every battleground state, in many cases by sizable margins. So why did the exit polls differ so substantially from the official count? In elections in Germany and the United Kingdom, exit polls accurately predict the outcome of national elections. And in the Ukraine that same month, an exit poll discrepancy was used to overturn the official results.

• Did the implementation of electronic voting systems pave the way for election fraud in 2004? Freeman and Bleifuss examine the vulnerability of new ballot technologies. In 2004, 64 percent of voters cast ballots on either electronic voting systems or optical-scan voting systems. A September 2005 study by the General Accountability Office found that such systems had security problems that “could allow unauthorized personnel to disrupt operations or modify data and programs that are critical to the accuracy and the integrity of the voting process.”

• Why were the exit polls so wrong? The pollsters who conducted the exit polls, Joe Lenski and Warren Mitofsky, produced a 77-page report that attempts to explain why the exit poll discrepancy occurred. Freeman and Bleifuss examine that report in detail and demonstrate that the pollsters’ analysis does not stand up under scrutiny. “Lenski and Mitofsky found it more expedient to provide an explanation unsupported by theory, data or precedent than to impugn the machinery of American democracy as practiced in the 2004 presidential election,” they write.

• Freeman and Bleifuss also analyze the Conyers Report and Democratic National Committee report, as well as earlier reports such as those on African American vote suppression conducted by the U.S. Commission on Civil Rights- all of which cast doubt on the integrity of the 2004 presidential election. The authors pay particular attention to Ohio, the critical battleground state. In Ohio, an extraordinary variety of electoral malfeasance is documented, including various forms of vote suppression, ballot “spoilage,” and institutionalized disenfranchisement- all of which amounted to more than enough to swing the election. So why weren’t the investigative arms of our government and the press more in evidence? Freeman and Bleifuss explore the reasons.

Freeman and Bleifuss present their case with scientific precision in clear and easy to understand language. Advance readers like the distinguished mathematician John Allen Paulos are already calling Was the 2004 Presidential Election Stolen? a “careful and judicious book” in recognition of the effort of the authors to rise above partisan politics.

STEVEN F. FREEMAN's analyses, together with a study by the University of California, Berkeley's sociology and demography departments, are recognized to have been the first serious attempts to examine the validity of the outcome of the 2004 presidential election. Freeman holds a Ph.D. from MIT's Sloan School of Management. He is on the teaching faculty of the University of Pennsylvania's Center for Organizational Dynamics, where in addition to his regular courses, he teaches workshops research methods and survey design (a domain that includes polling.) He has received four national awards for his research.

JOEL BLEIFUSS is editor of In These Times. An investigative reporter and columnist, his articles have appeared in The New York Times, Utne Reader, The Philadelphia Inquirer, and Dissent, among many others.